All photographs by Rodney Bursiel. 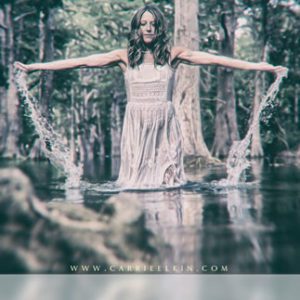 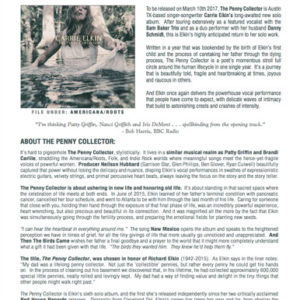 Carrie Elkin is one of those rare artists with a tidal wave singing voice, and a stage whisper writing voice that brings you to the edge of your seat, emotionally. Like Patty Griffin or Brandi Carlile, she straddles the Americana, Folk, and Indie Rock worlds, where meaningful songs meet the fierce-yet- fragile voices of powerful women. Like these other seminal artists, Elkin has the gift of projecting very personal intimate moments into transcendent universal experiences that move us all.

The voice, the stories, the images, the grace and infectious enthusiasm, it’s a complete package. But it’s the power of her live performances that really have been creating an incredible buzz

around this young artist. Maverick Magazine said it best, after a recent festival performance: “I have never seen a performer so in love with the act of singing. That’s the gospel truth, and from what I’ve subsequently learned, I’m not the only one to believe or state that. Onstage, Elkin was simply a force of nature.”

The Penny Collector is Elkin’s seventh record and is the long awaiting first solo release since her acclaimed Call It My Garden album was released in 2011 on venerable roots label, Red House Records. But she’s been busy in that time period, releasing a duo record with her husband, songwriter Danny Schmidt, performing as a featured vocalist in the Sam Baker Trio, and touring as the musical guest with the hit podcast Welcome To Night Vale. So it’s very exciting to have this new collection of her solo work. There’s just something stunning about hearing a celebrated vocalist step forward and deliver her own songs. Like hearing Emmylou Harris sing Red Dirt Girl, it reminds you what an incredible voice the Incredible Voice has.

Written in a year that was bookended by the birth of Elkin’s first child and the process of caretaking her father through the dying process, The Penny Collector is a poet’s momentous stroll full circle around the human lifecycle in one single year. It’s a journey that is beautifully told, fragile and heartbreaking at times, joyous and raucous in others. And Elkin once again delivers the powerhouse vocal performance that people have come to expect, with delicate waves of intimacy that build to astonishing crests and crashes of intensity.

For Carrie and Danny Duo Shows

All photographs by John Grubbs. 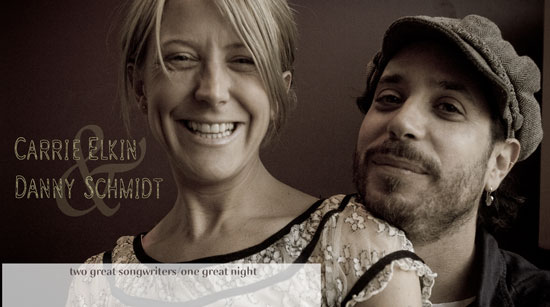 It’s a special treat when Danny Schmidt and Carrie Elkin, who normally tour separately and solo, get to share the stage together. If the chemistry seems especially sparkful, they come by it honestly, as they are a rare breed: a romantic partnership in real life, not just musical life. And the two together on stage makes for a classic case of the whole being greater than the sum of its parts.

Danny Schmidt is best known for his riveting poetic lyrics, which have drawn favorable comparisons to Leonard Cohen and Townes Van Zandt for their depth and complexity. And gypsy spirit Carrie Elkin is best known for her incredibly soulful and dynamic vocals, which have drawn favorable comparisons to Patty Griffin at her most powerful, and Nanci Griffith at her most intimate.

Together, the respective strengths they each bring, individually, merge into a much greater whole . . . a performance of great energy and spirit . . . and one that audiences seem to be able to connect with on a multitude of levels, at once: Emotionally, Spiritually, and Intellectually.

On Danny:
Named to the Chicago Tribune’s 50 Most Significant Songwriters in the Last 50 Years, Austin, TX-based singer/songwriter Danny Schmidt has been rapidly ascending from underground cult hero status to being broadly recognized as an artist of generational significance. Danny is considered a preeminent writer, an artist whose earthy poetry manages to somehow conjure magic from the mundane, leading Sing Out Magazine to tag him: “Perhaps the best new songwriter we’ve heard in the last 15 years.”

On Carrie:
Austin, TX-based Carrie Elkin is a born performer, possessing an infectious energy that cannot be contained. As Maverick Magazine so eloquently put it: “We have never seen a performer so in love with the act of singing. Onstage Elkin is simply a force of nature.” With her dazzling voice and unpretentious charm, Carrie wins over audiences with songs that are, as FolkWax puts it: “Intimate, yet universal. Naked, yet richly adorned. Her voice is simply revelatory.” 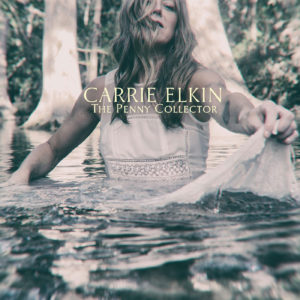